Ten months ago I launched remote-first (you can read more about that process here) which was the first paid product I've launched since I started working in IT. In this post I'm going to talk about why I believe it failed, the costs involved in such a failure, and how I'm closing out this project. This post will be presented as a postmortem so (hopefully) we can all learn from this failure and not repeat it.

I realize many of the expectations in this post could be considered naive and they probably are. I haven't run a business or site like this before so I wasn't sure what to expect or how to truly market the site appropriately. Having a product that addresses issues with other similar products is not sufficient and I've learned that I need to cast a wider net than I did in terms of marketing and demographic targeting. Now that I've said that let's get on to some more in-depth details.

Why I Thought It Would Succeed

As someone who works remotely I dislike many of the remote job sites that are out there. One of the biggest ones (weworkremotely.com) doesn't even support mobile devices so you have to scroll around when you visit it. I spoke about this during my launch article but being a mobile friendly site (both in terms of site size and usability) is really important to me. Being able to browse jobs no matter where you are is a requirement, and that experience should be excellent. Many of these sites fell into the common pitfalls of either being too heavy because they were built on a CMS, or they had lots of javascript and tracking elements. As someone who was looking for a job at the time I saw what I thought was an obvious failing in the market, a lightweight mobile friendly site that didn't scrape users for information they didn't want to share. At the time it seemed like a surefire idea, but as this post highlights it failed miserably. Let's talk about why.

I'm terrible at marketing. This is something I've learned through the life of this product. I didn't reach out to enough organizations and groups that might be interested. I also didn't have enough diligence in this aspect. I under budgeted myself when it came to the marketing aspect since I was trying to keep my costs low due to having quit my job. This was a huge failure on my part, what good is the product if no one who cares knows about it? I tried to remedy this with some Reddit advertising but this was a waste (after this project I would never advertise on Reddit again). I ran two ad campaigns totaling $52.06 which targeted subreddits I felt were the most relevant. I used the following ad for my ad campaigns, hoping to draw in remote companies with an honest ad that described exactly what the site was for:

My first ad campaign strictly targeted /r/sysadminjobs. I wanted to start small since I had already invested a good amount of time and money into the site between building it and logo design costs. It seemed to make the most sense to run on a smaller subreddit to see what kind of response the ad could elicit. Here's what the first campaign looked like: 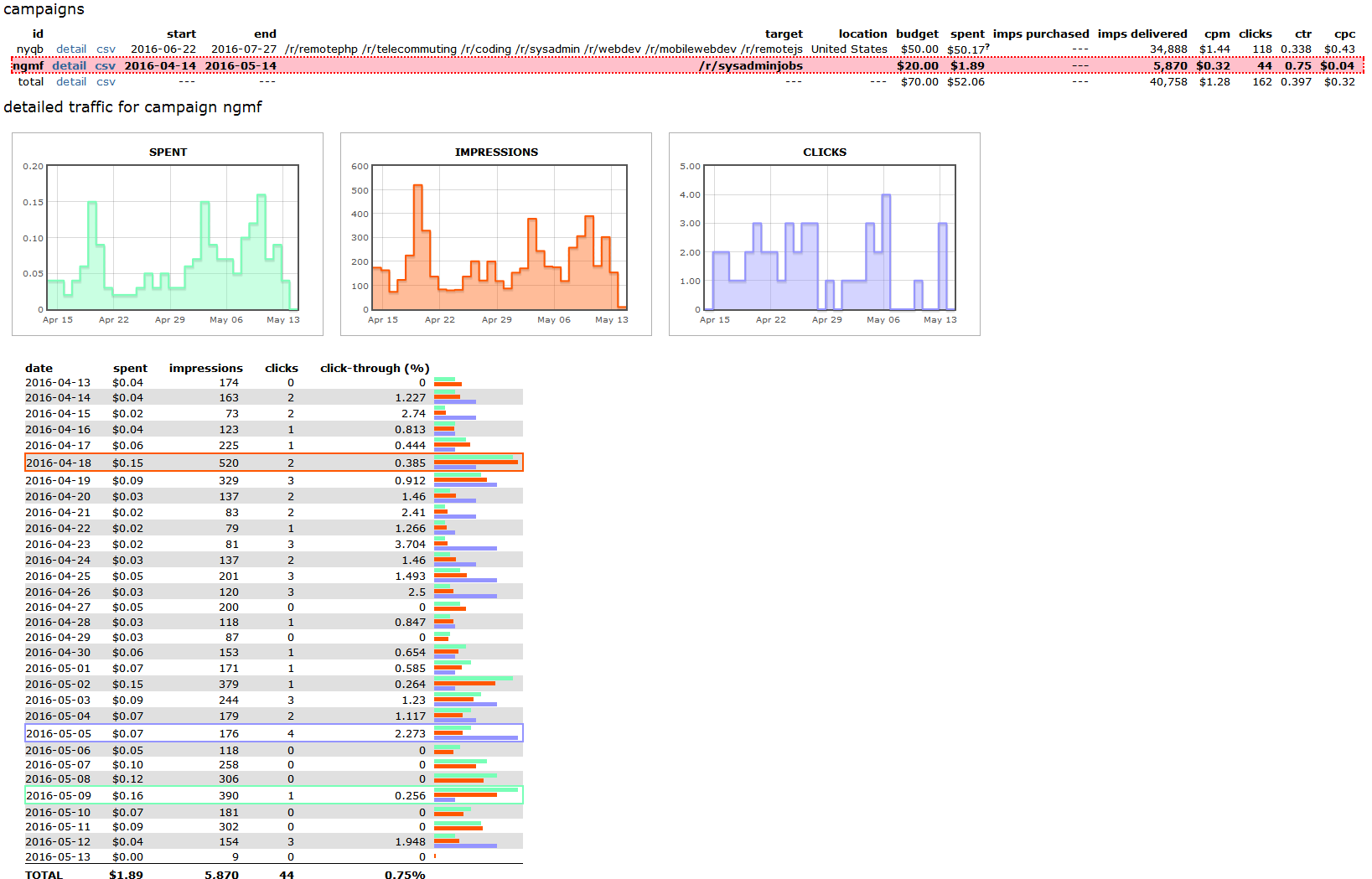 The first ad campaign ended up only costing me $1.89 as the subreddit was so small that it couldn't generate enough traffic to go through all of my ad money in the allotted time. The ad performed rather well compared to what I was expecting generating a click-through rate of 0.75%. This is still bad when you consider it against adwords which has a click-through rate of approximately 2% for searches, and it doesn't target users anywhere near as specifically as I did with this subreddit.

Being somewhat pleased with the first campaign I moved onto the second, casting a much wider net where I targeted several of the largest remote job subreddits. I tried to get /r/programming but someone had purchased all the ad space already, this time I invested $50: 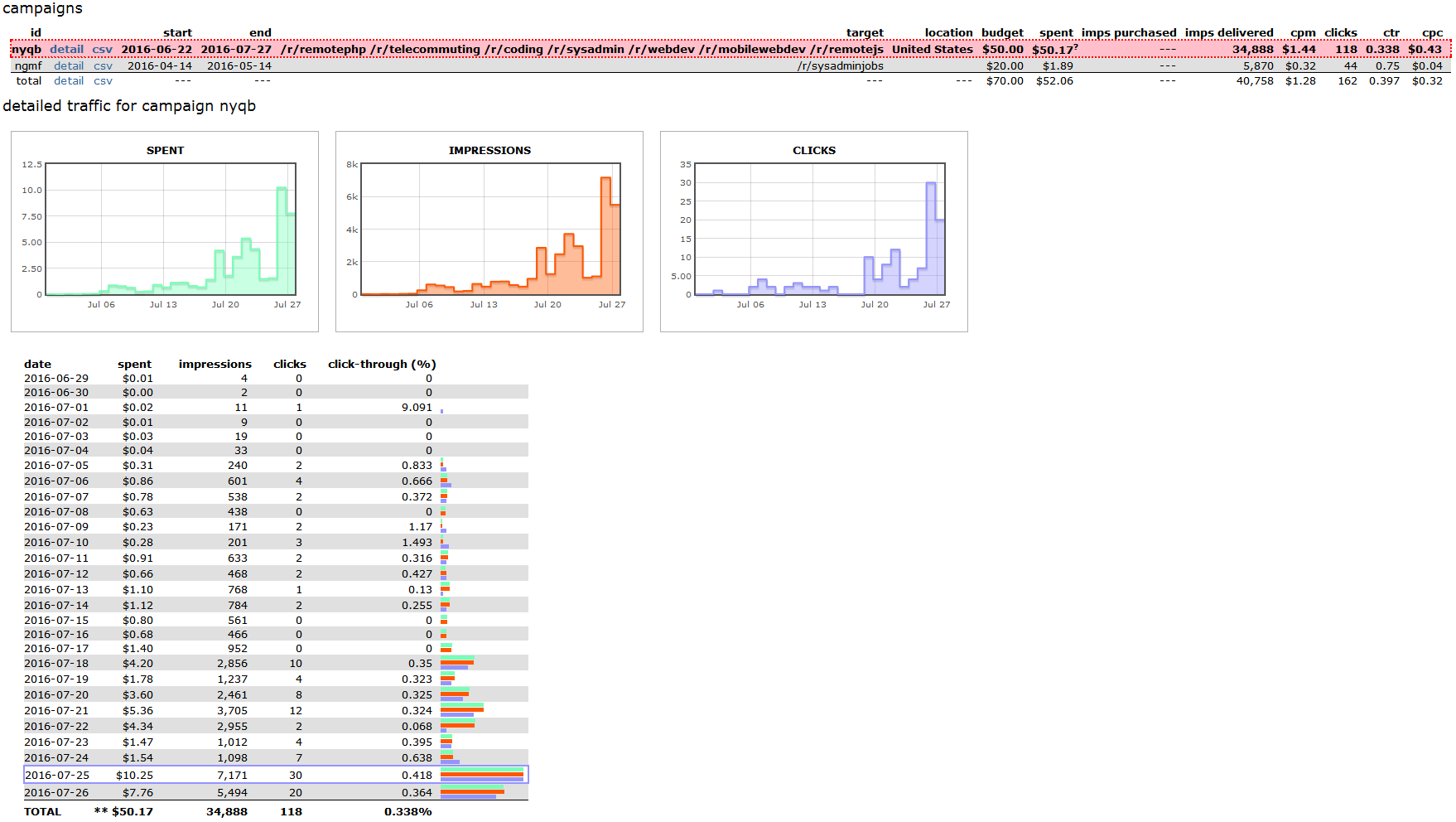 I didn't get very much traffic from this ad compared to the number of impressions and ended up with a click-through rate of only 0.338% which was pretty abysmal. Hilariously the /r/sysadmin ad generated the largest spike in traffic the site would see at any one time:

What I learned from this is that I targeted the wrong audience with my initial marketing strategy. My hope was to drive developers and other interested parties to the site so that they would talk to their team about posting a job. I should have done more research regarding how to target recruiters specifically since they are typically in control of the budget for job ads.

When I launched the site there was only a single example ad on the main page so potential customers could see what they were paying for. I attempted to get my job board added to a popular repository on GitHub but it was declined since there weren't any jobs on the board yet. I refused to 'steal' ads from other sites to populate my job site so the site was very bare bones with just my example job. I don't know how I would handle this knowing what I do now. On the one hand I think copying some ads from other locations would have provided me with a better marketing platform, but I still feel as though it would be a dishonest thing to do and wouldn't sit well with me. I would rather have a failed product than lie to potential customers.

My next failure was putting too much stock in having a simple mobile friendly design. I guess I overestimated the number of people who browse the subreddits I targeted from mobile devices as opposed to desktops. A staggering 79.88% of my total sessions were from desktop machines.

While I'm still extremely happy with the site on desktop devices (it uses dynamic scaling to ensure compatibility across pretty much any device) one of the site's main selling points is now lost, leaving me with a fast site that doesn't track you. While these aspects are satisfactory to me I imagine it didn't matter to most users of the site and wasn't a good enough hook to get them to consider buying an ad.

One of the other big mistakes I made was not improving (or even really working on) the site's SEO. I can't stand search engine optimization past making sure the site is responsive, fast, works on any device, and serves content over HTTPS. Sadly being satisfied with these results comes largely from my Engineering background where these are the most important aspects of a site.

I should have cared more about the extraneous parts of SEO (aka the boring stuff). Making the site performant is fun, working on a page's metadata is not. I'm not much of a frontend person to begin with and a large portion of my time was already spent making the layout of the pages look good. By the time I got around to doing SEO tweaks I didn't go the extra mile to make sure my site was meeting all the criteria search engines look for.

Initially when I purchased advertising through Reddit I thought this was a good way to go since there were lots of subreddits discussing ads, but as this article I linked on Twitter points out advertising on Reddit actually sucks. People are extremely adverse to advertising there and it can bite you. If I had it to do over again I would definitely go with other advertising platforms. I targeted people who would be looking for remote job advertisements instead of people who were looking to purchase remote job advertisements and I think this really hurt the site's potential. Coupled with my unwillingness to spend more money on the site (by this time I was working a new job and pushed the site to side project status again) I think this really hurt my potential. It was absolutely my fault and it's something to focus on in the future, don't target people who aren't spending money at your site in hopes that they talk to the people who will.

I'm disappointed to say it but I made exactly 0 dollars off of remote-first. It didn't cost more than I expected to run, it simply didn't provide any return which I wasn't expecting. Let's look at the cost breakdown here in terms of hours and money spent:

In addition to this fiscal cost it took between 23 and 25 hours to design and build the site, along with anywhere between 12-15 hours dealing with marketing research, maintenance, and other assorted tasks. Overall this was a pretty cheap project in terms of time and cost. I'm not happy with the results, but I am glad that I've learned quite a bit from this project's postmortem. Having a product that solves a problem alone isn't enough. You need marketing, word of mouth, and some excitement built around your product to truly get the kind of traction needed to become successful.

Closing Out the Project

The domain for remote-first is expiring shortly and I won't be renewing it. I've decided to open source this project and all of the code with an MIT license. I've chopped the commits since they weren't especially relevant plus they included sensitive data that I didn't feel like going back through to prune.

You can review the site code here: https://github.com/gravyboat/remote-first

and the salt based deployment code here: https://github.com/gravyboat/remote-first-salt.

If either of these repos benefit you in some way I'd love to know, and if you somehow make a bunch of money feel free to throw some my way.